My job to the outside world is a little like Chandler’s job from the TV show Friends; I’m a data transponster. I often struggle to explain what I do to people who do not belong to this industry, and hence I leave it at business development. With time, Ruki has learned what I do and is now able to explain to anyone who asks what RFPs and RFIs are… Her world is fundamentally different from mine, and it was difficult to explain work calls late into the night or early in the morning. Having worked for close to eight years in a role that requires me to coordinate and collaborate with stakeholders from different nationalities and cultures, I can relate to almost every aspect that Erin Meyer covers in her book, The Culture Map.

Simply put, she attempts to analyze and place cultures on eight scales: style of communication, method of giving feedback, persuading people, leading teams, making decisions, trusting, disagreeing, and scheduling. Depending on where cultures fall on these scales, she then goes on to list out clear strategies for managing cross-cultural teams, equipping executives with a framework for better decision making. Sample the following mapping sourced from lecture notes on her website: 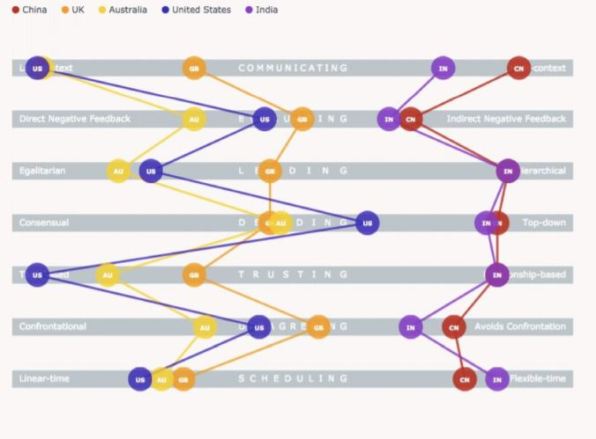 India and China fall clearly on the right of these scales, meaning these are high context cultures where communication is nuanced and layered (think of the non-committal Indian headshake). These cultures are hierarchical (think of the respect that elders in Indian families generally command even if they’re unreasonable and wrong), top-down, and business is built on relationships (think of how some of the biggest companies in India are still family-run businesses). Most of the Anglo-Saxon cultures fall on the left of these Asian giants.

As a parting note, learning to document meetings didn’t come easy to me when I started my career. Meyer’s book theorizes that my culture is high context, which means that communication is generally indirect and implied. A lot of emphasis is placed on the spoken word than the written word. Considering the kind of influence that the mythological epics, the Ramayana and the Mahabharata have had on the Indian psyche, I wonder if there’s a connection. These epics were transmitted orally, as was ancient Vedic knowledge, for years before it was documented. My reluctance to sit with a notebook and a pen during work calls has more to do with my culture than with being a millennial. Or not 😉

Her book has a rating of 4.34 on Goodreads and should be mandatory reading material in b-schools everywhere!

With a rating of 4.6 on #goodreads, Patrick Keefe's The Empire of Pain is the best and one of the highest-rated books I have read this year! Written in language that makes it extremely accessible, the book chronicles the story of the family behind #OxyContin and the #opioidcrisis in #America. Keefe covers four generations of the #Sacklers and documents the greed and denial they embody, keeping their company and the drug at the center of the story - a no small feat by any measure. The author punches above his weight and manages to shatter a name that adorns some of the biggest museums and schools in the world. Keefe is meticulous in his research, and the book itself is well-paced, effortlessly moving through a period of about 107 years. He manages to highlight the insatiability that has come to define #bigpharma in particular and #capitalism in general, and is convinced that the Sacklers, while not the only guilty party in the opioid crisis, have a disproportionate burden of the blame to bear. Their fortune is #bloodmoney made from peddling a drug they knew was addictive for as long as they could before the patent protections ran out. A fantastic read to round out a crazy week!
Same content, different platform! Post for posterity! 🤭
I took this #silhouette on one of my treks in the #Garhwal region of #Uttarakhand. I remember spotting our guide at the edge of the camp just as we were finishing a meal and about to retire for the evening. I often revisit these memories, telling myself that I’ll return someday.
#throwbackthursday review of a highly-rated book and a personal favourite that I’d first posted three days before #India’s first #lockdown in 2020. As an investor, I stay away from sectors I don’t understand fully and the Indian #pharma industry represents one such area.
#happyindependenceday! Here’s the #India section from my library. I recall a part of the prologue from Ramchandra Guha’s #indiaaftergandhi where he says that the #British did not think democracy could survive in India. The thinking then was that the country was too disparate and her states were too dissimilar culturally for there to be any kind of a common governance framework. We’re still as dissimilar, and we’ve made it to 75. Upwards and onwards! #jaihind 🇮🇳🚀
When you’re shooting your book and your favourite people walk into the frame to remind you of everything that is simple, beautiful and pure! @sagarjain999
I wonder what masochistic sorcery drives me to pick up books on topics that clearly leave me exhausted and drained. Especially if it starts with these words: “It is worse. Much worse than you think.” To say that David Wallace-Wells’ The Uninhabitable Earth is an essay that explores a world worsened by climate change is an understatement. Using language that conveys earnestness, alarmism and cynicism, he paints a grim picture 80 years into the future at different stages of warming.
Here’s another picture I took on the same trek to Kuari Pass (also called Lord Curzon’s trek) in 2011. I remember stopping at this small shanty by the trail on our second day for a cup of hot tea and… Maggi! I asked if I could shoot a few pictures and he threw this pose :)
Notes on a Nervous Planet, as its name suggests, is a notebook where @mattzhaig has scribbled his thoughts on depression and anxiety. It is a running commentary – a monologue – on the usual suspects that have made us more nervous than we ever were: smartphones, social media, news, marketing that panders to our insecurities, lack of sleep, work.
Michael Lewis’ The Premonition is more drama and less science. It reads like a screenplay or a script for a movie than an honest attempt at educating the public about the real heroes of America’s fight against Covid-19. In his effort to make the content more accessible, he chooses to focus on the frivolous, ignoring the role and the expertise that this ragtag bunch of misfits brought to the fight – for about half the book. It felt like a Marvel formula: introduce each character with an elaborate backstory that explains why they are where they are, and then weave it all together in a fight against a common enemy – the CDC and its incompetence, and the Covid 19 pandemic.