For a lot of us who grew up in the 90s, religion was a big part of our lives. This was the time of Amar Chitra Katha’s graphic novels, and televised versions of the Mahabharata and the Ramayana. Over the years however, I’ve stayed away from writing about religion, and the quagmire of politics that goes with it, for obvious reasons. But William Dalrymple’s Nine Lives is a case study on how to write without the fear of criticism and controversy. 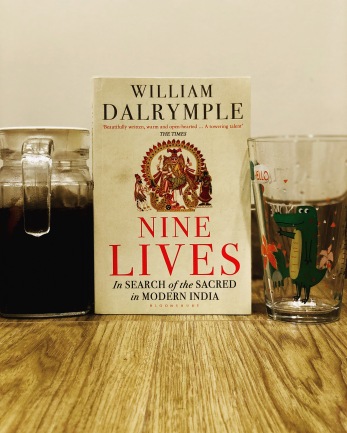 It is, as the name suggests, a collection of nine stories of people who have renounced the world to take up lives of religion and asceticism, offered sans commentary or judgement. From well-known religions such as Jainism and Buddhism to the more obscure and esoteric practices of the crematorium-inhabiting Tantrics of Tarapith and the Baul wanderers of Bengal, William Dalrymple’s stories are told with an enthusiasm fed by curiosity, open-mindedness fed by intellect, and a general sense of wonder fed by Indomania. Each story does justice to its protagonist, and navigates the nuances of such a subject with grace, respect and dignity, while weaving it together with annotations around the impact of contemporary history and geography of the Indian subcontinent on its belief systems.

There are a few books I have read over the last 18 months that have had the kind of impact that this one did – by using words to open up windows into worlds separated by time and space, and language lucid enough to conjure images of people and their practices, icons and idols, tombs and temples. While it has a rating of 4.05 on goodreads, it’s an easy and fulfilling read that I highly recommend.

PS: On a separate and completely unrelated topic, does the voiceover for the Watcher at the start of Marvel’s What If remind anyone of the monologue at the beginning of every episode of the Mahabharata?