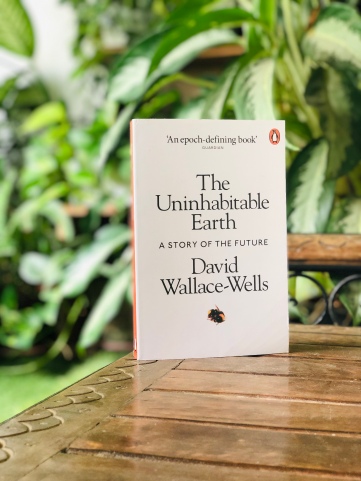 I wonder what masochistic sorcery drives me to pick up books on topics that clearly leave me exhausted and drained. Especially books that start with these words, “It is worse. Much worse than you think.” To say that David Wallace-Wells’ The Uninhabitable Earth is an essay – which is what it was in its original form – that explores a world worsened by climate change is an understatement. Using language that conveys earnestness, alarmism and cynicism – for this, he believes, is the only way to wake up the human race from its slumber of denial and ignorance – he paints a grim picture 80 years into the future at different stages of warming.

Imagine an interactive dashboard where you could slide a flag on a scale, starting from 2°C (the line in the ground that was drawn in 2016 at the Paris agreement), crossing thresholds such as 3.2°C (if the world were to immediately ratify the emissions targets of the Paris agreement) and 4.5°C (if we continue on our current emissions path) and on to outlier but probable scenarios of 6°C and beyond. For each threshold, imagine if you could see the devastation that occurs, not just across a map of the world at the bottom of this dashboard, but also to the city and the town where you currently reside, covering – to borrow a term – elements of chaos such as: heat, hunger, rising sea levels, wildfires, natural disasters, dying oceans, air pollution, diseases, economic collapse and war. That is this book. END_OF_DOCUMENT_TOKEN_TO_BE_REPLACED